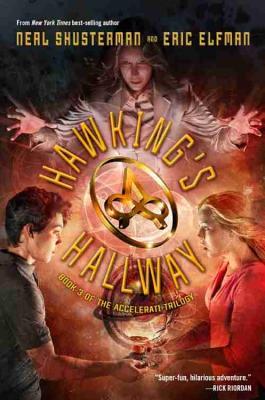 Nick Slate, in order to protect his father and little brother, reluctantly must help the Accelerati complete Tesla's great device. Their power-mad leader wants nothing less than to control the world's energy--but there are still three missing objects to track down.

Nick's friends can't help him, as they are spread across the globe grappling with their own mysteries--with Vince in Scotland, Caitlin and Mitch on their way to New Jersey, and Petula's whereabouts unknown. On his own, Nick must locate Tesla's final inventions-- which are the most powerful of all, capable of shattering time and collapsing space.

* "...Shusterman and Elfman have crafted a plot more devious, characters far quirkier, climaxes (yes, there are two) more breathless, and a narration much, much funnier than recent mad-science offerings. Sticking with a third-person narration frees the authors to be as wryly and sophisticatedly witty as they please without compromising the veracity of their middle-school cast, resulting in storytelling as delightful as the story being told."
-Bulletin for the Center for Children's Books (starred review)

"Lively, intelligent prose elevates this story of teenagers versus mad scientists, the third-person point of view offering a stage to various players in their play of galactic consequence. A wild tale in the spirit of Back to the Future, with a hint of Malamud's The Natural tossed in."--Kirkus Reviews

"This collaboration between Shusterman and Elfman tempers the scarier elements of Nick's quest with deft, humorous writing and plenty of the ordinary adventures of a new kid in school finding his niche. Hand this one to fans of Rick Riordan's Kane Chronicles or Kenneth Oppel's Airborne."--Booklist